In general, lawyers are not allowed to act on matters where they have a conflict of interest. To do so is contrary to the common law and the Rules of Professional Conduct. Accordingly, a lawyer can be removed from representing a client in a litigation matter where there is a reasonable possibility of the misuse of confidential information by a lawyer against a former client or where the lawyer will be a necessary witness at trial.

In the recent decision of 2658396 Ontario Inc. v. Sanayei, 2022 ONSC 3189, these two separate grounds were successfully argued to remove the plaintiff’s lawyer from the record, thus requiring the plaintiff to retain a new lawyer.

On April 22, 2019, the second mortgage went into default. Two months later, the first mortgagee issued a Notice of Sale under the Mortgages Act to sell the property. At this time, the plaintiff learned about the third mortgage.

The plaintiff later retained his current lawyer (DB), who was one of the lawyers referred by the defendant lawyer, and commenced a mortgage enforcement action of its own against the mortgagor. No steps were taken by the plaintiff to bring the first mortgage into good standing, to take over the power of sale proceedings, buy out the first mortgage, or otherwise protect the interests of the second mortgagee. The property was sold by the first mortgagee, with a significant shortfall on the second mortgage. The mortgagor subsequently made an assignment in bankruptcy. This caused the plaintiff to sue the defendant lawyer to cover his losses.

The defendant lawyer contended that DB was in a conflict of interest in the action against him. The defendant lawyer provided evidence that DB had previously acted for him on matters that overlapped the mortgage enforcement dispute and that before DB had been retained by the plaintiff he had consulted with DB and sought advice about the second and third mortgage problem that was the subject matter of the plaintiff’s action.

The defendant lawyer and DB had known each other for 20 years and they had maintained a friendly and professional relationship during this period of time.

Amongst other things, the defendant lawyer argued that while he referred the plaintiff’s principal to DB to enforce the second mortgage, he never anticipated the plaintiff retaining DB to sue him.

In MacDonald Estate v. Martin, 1990 CanLII 32 (SCC), the court determined that a lawyer will be found to have a disqualifying conflict of interest where there is a probability of real mischief and the possibility of real mischief that a lawyer will misuse confidential information against a former client. The test is such that the public represented by the reasonably informed person would be satisfied that no use of confidential information would occur.

Justice Sopinka in this seminal Supreme Court of Canada case described that these kinds of cases required two questions to be answered:

The court found that the DB and the defendant lawyer had been in a previous solicitor-client relationship and that DB had received confidential information from him with respect to the subject matter of the plaintiff’s action against the defendant lawyer.

There was a risk that this information would be used to the prejudice to the defendant lawyer as his discussion with DB about his involvement in the two mortgages went to the heart of the plaintiff’s claim and would be impossible for DB compartmentalize.

Although there was some delay in bringing the motion, this was insufficient to prevent DB’s disqualifying conflict of interest.

In the alternative, the court found that DB had a disqualifying conflict of interest because there was a sufficient likelihood that he would be a witness at the trial. In Mazinani v. Bindoo, 2013 ONSC 4744, the court found that a lawyer will have a disqualifying conflict of interest where he or she acts for a party but will be a witness in the same proceeding. In circumstances where it is sought to remove a lawyer on the grounds that he or she will be a witness, factors set out by the Divisional Court in Essa (Township) v. Guergis, 1993 CanLII 8756 (ON SCDC) must be considered. Those factors are:

(iii)       the good faith (or otherwise) of the party making the application,

(v)        the impact of removing counsel on the party’s right to be represented by counsel of choice,

(vii)      who will call the witness if, for example, there is a probability counsel will be in a position to cross-examine a favourable witness, a trial judge may rule to prevent that unfair advantage arising, and

(viii)     the connection or relationship between counsel, the prospective witness and the parties involved in the litigation.

Applying the Essa (Township) factors, the court reasoned that they either favoured removal or were neutral. The only factor that did not favour removal was that the plaintiff would be put to the expense of retaining a new lawyer. This would cause some delay in the prosecution of the plaintiff’s case. While delay also raised a question of good faith in seeking DB’s removal, DB could nevertheless not be both a lawyer and a witness in the proceeding.

The defendant lawyer was represented on the motion to remove DB as lawyer of record for the plaintiff by James Cook and Kevin Mooibroek.

Mr. Cook is a senior partner in the firm’s Dispute Resolution Group. Mr. Mooibroek is a junior associate in this Group.

Mr. Cook and Mr. Mooibroek were assisted in the preparation of written argument used in support of the motion to remove DB as lawyer of record for the plaintiff by Stephen Thiele, a partner and the firm’s Director of Legal Research.

If you require any litigation assistance, our Dispute Resolution Group lawyers are available to assist you. Please contact Stephen Thiele at 416.865.6651. 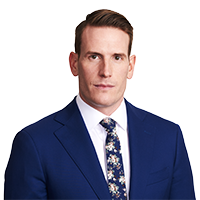