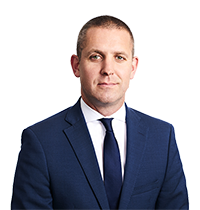 James has vast litigation experience and since his call to the Ontario bar in 2012 he has consistently appeared before the Superior Court of Justice with respect to property damage, product liability and personal injury claims.

James holds a Master of Arts degree from Trinity College Dublin. In 2008 he became a solicitor through the Law Society of Ireland. He apprenticed and practiced at a leading commercial law firm in Dublin. He completed the National Committee on Accreditation process of the Federation of Law Societies of Canada before he was called to the Bar of Ontario. Before joining Gardiner Roberts he practiced for several years at a leading insurance defence firm in Toronto. In 2018 he was admitted as a solicitor in England & Wales.

Ireland Fund of Canada “Young Leader” volunteer since 2012. James has played a leading role in organizing and hosting fundraising events in Toronto for the Ireland Funds, a global charitable organization.