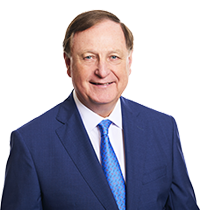 John has been a trusted advisor for 45 years in public and private corporate, family enterprise, regulation and government: advice, court tribunal, arbitration, and mediation, dispute resolution and strategy; teaching, writing and development of law: called to the Bars of Ontario, Northwest Territories, British Columbia, Alberta, Manitoba, Québec, New Brunswick and Nova Scotia. He has represented clients in England, Europe, Asia and the USA, before the Courts of ten Provinces, the Federal Court, the Supreme Court of Canada and before federal and provincial tribunals, public inquiries, mediations and arbitrations (nationally and internationally). John has been counsel in over 300 reported private law and public law trials, hearings, appeals and judicial reviews and arbitrator in over 20 commercial arbitrations.

John Campion is nationally and internationally recognized (Chambers, Best Lawyers, Lexpert, International Who’s Who of Business Lawyers, Martindale-Hubbell) as one of Canada’s leading senior trial, appeal and arbitration counsel. He has been an elected Bencher of the Law Society of Upper Canada since 2000 and was President of the Federation of Law Societies of Canada, representing Canada’s 100,000 lawyers nationally and internationally. He has been active in his community: President of The Empire Club of Canada, counsel to the Director of the Canadian Broadcasting Corporation and an adjunct professor of law, Toronto and Osgoode. He is an author of Professional Liability in Canada and publishes and lectures broadly throughout
Canada and internationally..