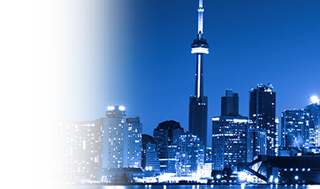 Gardiner Roberts’ beginnings can be traced back to 1913, marking the graduation of H. Fred Parkinson who, articling with the firm of Mowat, Langton and MacLennan, joined them as full partner two years later. Parkinson’s younger brother, Harry, articled with Rowell, Read, Wood and Wright in 1919, taking on Frederick G. Gardiner, until Harry and Fred teamed to form Parkinson and Gardiner, based on Broadview Avenue. H. Fred joined them, along with Harry Willis, to form Parkinson, Gardiner, Willis in 1935. Harry D. Roberts – a student with the firm, joined in ’48, creating the genesis of what was to be Parkinson, Gardiner, Willis and Roberts. As with most law firms, the names would change over time and it would not be until 1967 that the name Gardiner Roberts would first appear, following the passing of H. F. Parkinson.

What is key in the development of any law firm is the people whose contributions lend it its distinctive identity and overall culture. Gardiner Roberts gathered its pedigree through the efforts of the colourful characters that have brought their varying talents, strengths and specialties to the table, lawyers and staff alike. From the superb technical skills and insatiable curiosity of H.F. Parkinson, whose meticulous approach to appellate work proved legendary, to the larger-than-life flamboyance of Fred Gardiner with his love of civil litigation, his insatiable appetite for the aggressive cut-and-thrust of the trial process, together with his love of politics. “Big Daddy” Gardiner was as he appeared – larger-than-life, from accounts of his adventures as a dazzling raconteur together with his appointment, in 1953, as Chairman of the newly-formed Municipality of Metropolitan Toronto – an office he held for 9 years before returning to his beloved law.

Harry Parkinson specialized in residential real estate while the unflappable Harry Roberts focused on commercial real estate. John Conlin, celebrated war hero and specialist in the area of administrative law, became known for his work in zoning matters with the Ontario Municipal Board. The Honourable Lloyd W. Houlden, upon retirement from the Ontario Court of Appeal, injected Gardiner Roberts with a strong commercial law presence, given his skills in bankruptcy and insolvency law. When Gardiner Roberts merged with Farano, Green in ’99, the added expertise of taxation law, vital to commercial practice, added nicely to the firm’s established reputation.

These pages from history serve to underline one of Gardiner Roberts’ key strengths – its people. With over 65 lawyers, Gardiner Roberts has strategically retained its mid-sized status, and when combined with the essential and enthusiastic services of law clerks and support staff, the firm employs over 150 talented individuals.

The calibre of those who work at Gardiner Roberts and their unflagging commitment and dedication to doing the best job possible have engendered an enviable degree of loyalty from our clients, large and small – many of whom have been part of our team for years and for all the right reasons. This, coupled with a sincere belief in moving forward through supporting our teams and by recruiting the best talent, is in keeping with the Gardiner Roberts’ clients-first philosophy – one which has buoyed and supported Gardiner Roberts for nearly 100 years.

The future of Gardiner Roberts lives in our determination to help our clients grow their businesses and by continuing to earn their confidence with their ongoing legal needs. 100% Canadian and fiercely independent, Gardiner Roberts has never believed in growth for growth’s sake, choosing to base our organizational goals on evolving to meet each client’s long-term interests while keeping their businesses successful in the short-term. It’s what has built and kept our business strong for more than a century – truly the secret of our success.